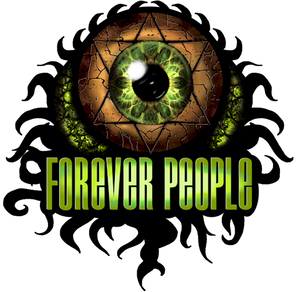 Forever People was launched as a small and very independent collaborative RPG writing community in 1998. The company initially served as a vehicle for various hair-brained, half-baked and amateur roleplay ideas written by some of our early contributors including Steve Dean, Wyn F Dawkins, Susie Dent, David Sharrock, Tamsin Bailey and Andrew Sykes. Between 1998 and 2007 this original cast of characters eventually took on projects of their own and Forever People was unofficially disbanded, though the company continued to trade by selling amateur zines at conventions and some low-key material on Drive Thru RPG (most notably the Random Encounters series).

In 2007 David Sharrock, one of the original founders, purchased ownership rights to Forever People and renamed the company Forever People Digital Press. Thereafter David launched his own catalogue of titles including the Wyrd RPG setting and the One Session Dungeon series (which is still available on Drive Thru).

In recent years David has returned to his first two loves - the fantasy gamebook milieu and the Lovecraftian genre. The former has lead to the production and launch of the Woven Paths series, an extensive fantasy gamebook saga which mixes David's love for designing unique and compelling realms and his tendency to create mind-bending narratives. The latter fuels David's ongoing fascination with and involvement in the Call of Cthulhu RPG and is responsible for an upcoming range of Call of Cthulhu titles which will be made available via the Miskatonic Press. At the same time David and an ever growing band of friends and players continue to create and play RPG content and release new amusements under the RP Zine umbrella.

Forever People Digital Press is, and always has been, a very small independent endeavour. We have little interest in becoming a big name content creator and most of our catalogue is a labour of love, sweat and tears rather than profit. Your support is therefore critical in continuing to fuel our interest and ideas. We always appreciate meeting and hearing from new names and new faces so if you've recently discovered our content please do say hi. You can find us on Facebook either on the Woven Paths page or the 'Old School Gamebook Revival' discussion group, a forum dedicated to the return of the choose-your-own-path literary genre.